As the winter dragged on, the Philadelphia Philllies began popping up as a potential landing spot for free-agent starter Jake Arrieta. It had already been an aggressive offseason for Philadelphia, with first baseman Carlos Santana coming aboard for three years and $60 million and reliever Tommy Hunter signing on for two years and $18 million.

That’s a lot of money for a team that has not had a winning season since 2011. Santana and Hunter are both solid players, but neither projects as an All-Star. The signings, though, made it clear that the Phillies have plenty of money to spend. When the price dropped low enough, they pounced on Arrieta for three years and $75 million.

While Arrieta can opt-out of his contract after a single season, make no mistake — this is a move with an eye on the future. The Phillies have stripped payroll down to nothing, and are flush with cash at the perfect time.

Bringing in an established ace like Arrieta does not make this team an overnight contender. Remember, the Phillies did lose 96 games last year and have more questions than answers in their starting rotation behind their new purchase and young right-hander Aaron Nola. Jerad Eickhoff and Vince Velasquez have potential, but need to stay healthy and put together consistent runs of strong starts instead of intermittent flashes of brilliance.

Instead of making the Phillies into a winner for 2018, this move points towards an even more aggressive future. They won’t win 96 games this season, but they are trending in the right direction. The moves this winter are all focused on creating an attractive landing spot for next year’s epic class of free agents.

All-Stars Manny Machado, Bryce Harper, Josh Donaldson, Charlie Blackmon, Clayton Kershaw and David Price can all become free agents next winter. At least one will end up as a member of the Phillies. A few more years down the road, South Jersey native Mike Trout will be on the open market. The league’s best player has already built a strong friendship with Eagles quarterback Carson Wentz. Trout will have a hard time passing up a ten-year offer from his hometown team, especially if the Phillies are rolling.] 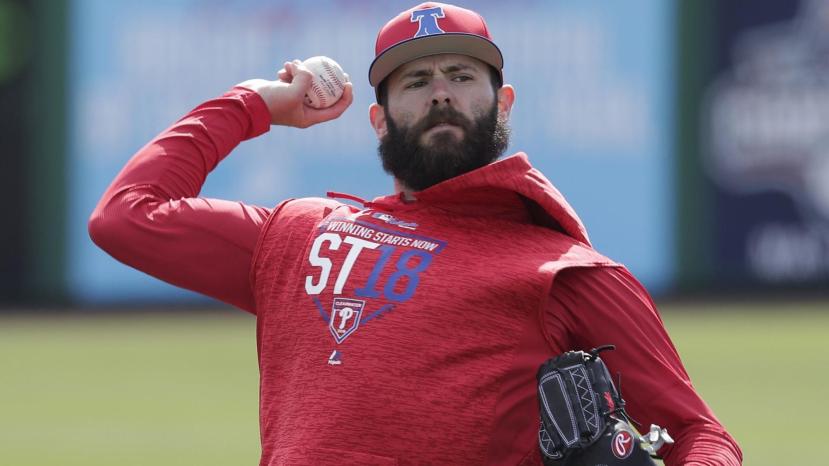 Arrieta also comes to Philadelphia as the perfect mentor for the young arms in the rotation. Developing their next core of position players has not been an issue for the Phillies. The core of Odubel Herrera, Rhys Hoskins, Nick Williams, Aaron Altherr, Jorge Alfaro and J.P. Crawford has as much upside as a group as the core led by Jimmy Rollins, Chase Utley, Shane Victorino and Ryan Howard that won a World Series.

Pitching has not come along quite as quickly for the young Phillies, but the staff has largely been without veteran leadership. That changes now with the addition of Arrieta, a proven winner who went through his own development ordeal with the Baltimore Orioles before hitting it big with the Chicago Cubs. He brings the credibility that will make every young pitcher in the organization stop and listen. This is a credibility-building move on many fronts for the Phillies, and the deal can still be labeled a success even if Arrieta never approaches his Cy Young form.

The Phillies do have a chance of sneaking up on the National League and fighting for a Wild Card. It would not be out of the question to see them approach 85 wins, but the real window opens next year and beyond. Winning players are beginning to take notice of what the Phillies are building, and more will follow.

This is an absolute win-win move for the one city in America that has been doing nothing but winning for the past three months.