Acclaimed novelist, screenwriter and game designer Chuck Wendig visited KU on Sept. 28 to speak with students about the craft of writing and to tell his story. Wendig, known for his books on writing and his Star Wars Aftermath series, told attendees his own tale, beginning with his humble beginnings as a reporter for the Independent Cash Register Dealer’s Association to his recent work with Marvel Comics.

Wendig touched on various facets of writing, including writer’s block, originality and breaking into publishing.

“I focused very early on, even in college, on writing novels that I thought would sell. So I was chasing the market, I was chasing my idea of what were sellable market novels,” Wendig said. “I wrote five books during that time. When authors write books that are not successful they call them trunk novels. These were probably very literally trunk novels, like they should be in a lead-lined trunk buried somewhere six feet deep in my backyard. If anyone were to ever open this trunk, it would cause an airborne toxic event; they were very bad, very bad books.”

Wendig said after struggling to complete novels and get them published, his success came after winning a screenwriting competition that taught him how to adapt novels into screenplays. It was this screenplay writing process, that helped him outline his novel and fully compile his ideas into a complete novel.

“The lesson is that when your process is not working, you need to change your process,” he said.

On freelance writing, Wendig said writers must possess two of three essential qualities to succeed. They have to be fast, friendly and/or good. Wendig said being fast and friendly still helps him to this day in his work as a novelist and fiction writer. 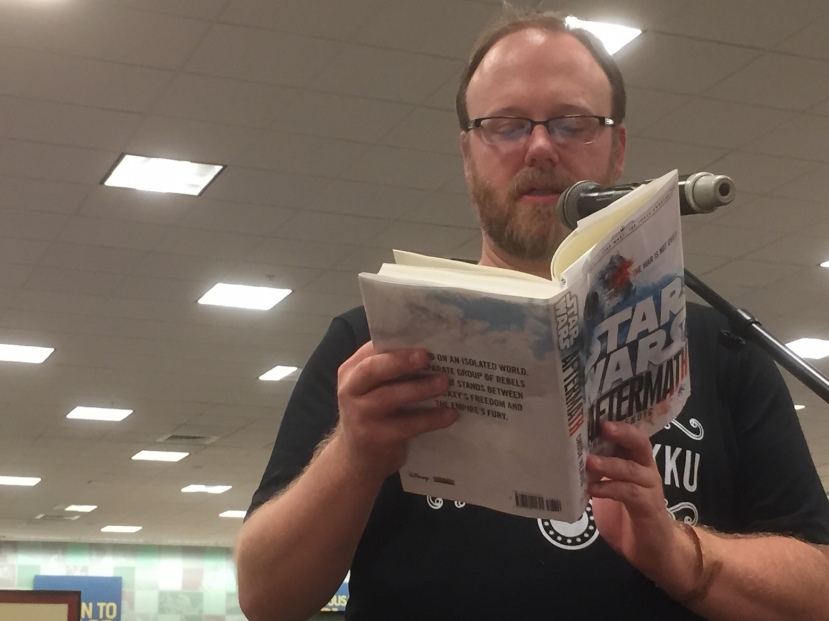 Writer’s block, he said, often occurs as a manifestation in a writer’s mind that comes as a result of other underlying problems, such as depression or anxiety. He stressed that it is important that writers manage issues that can impede their ability to think clearly and complete work.

Wendig touched upon his own writings as well, revealing that his most favorite works to write were those in his Miriam Black series.

Wendig is currently working on multiple books set to be released in the near future. Updates about his life and work can be found on his blog, terribleminds.com.